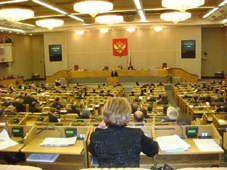 Russian MPs plan to advise their government to open missions in the self-declared republics of Abkhazia, South Ossetia and Transdniester, after the first day of Duma hearings on whether to propose full recognition of the unrecognized separatist regions. (more) 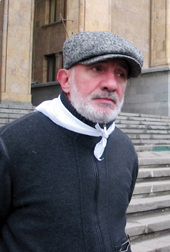 The eight-party opposition coalition, looking for a show of strength, is urging all its supporters to demonstrate in front of parliament on March 16.

Leading coalition member Levan Gachechiladze said the mass rally would support the hunger strikers currently encamped on parliaments steps. But the announcement was overshadowed by the drama of television reporters quizzing a leading opposition politician on his recent meeting with an exiled Russian oligarch. (more)

US State Dept. report: respect worsened for some civil liberties in Georgia

The governments record on media freedom and political participation regressed in 2007, especially during the political unrest in November, according to the annual US Department of State Country Report on Human Rights published on March 11. (more)

The Week in Brief

The Week in Ink

PM in Baku for gas talks

Prime Minister Lado Gurgenidze, Energy Minister Aleksandre Khetaguri and Finance Minister Nika Gilauri left on a one day visit to Baku yesterday, where they were due to meet Azerbaijani officials to discuss energy issues, including the supply of Azerbaijani gas to Georgia. (more)

Armenian president-elect Serzh Sarkisyan says he does not think the BakuAkhalkalakiKars railway project is directed against Armenian interests. (more)

Georgian mineral water has a better chance to return to the Russian market (more)
Coverage and analysis of the latest news from Georgia's most trusted newspaper
What is the biggest obstacle to Georgia receiving NATO Membership Action Plan?
View Responses
US Dollar - 1.5190
Euro - 2.3665
Pound Sterling - 3.0890
Russian Ruble - 0.0641
Swiss Franc - 1.5071

The Messenger welcomes your comments, questions and letters to the editor. Please write to us at gtze@messenger.com.ge
The Messenger is looking for a new staff journalist