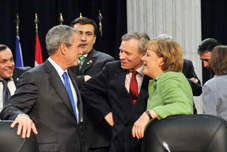 NATO pushed back the membership bids of Tbilisi and Kiev yesterday, assuring them of eventual entry into the alliance but withholding politically key invitations to the next step in the accession processs. (more) 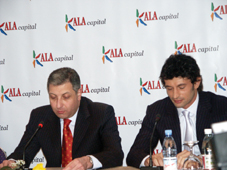 Georgias most famous footballer stepped into Georgias investment market this week with an ambition as big as his AC Milan paycheck, announcing the creation of a USD 1.5 billion business group. (more)

The Week in Brief

The Week in Ink

The total amount of crude oil to have passed through the BakuTbilisiCeyhan pipeline reached 333 million barrels by the end of March, generating some USD 1.5 billion revenue for Turkey, according to a representative of Botas, the Turkish state oil company. (more)

The Azerbaijani government is stepping up efforts to combat corruption, officials said at an international conference on corruption at Baku on April 1. (more)

The Week in Business

A captivating story of life, love and blood revenge in Svaneti (more)

Turkishmish, a new confectionary store in Rustaveli Cinema, offers a range of goodies shipped straight from Istanbul. (more)
Coverage and analysis of the latest news from Georgia's most trusted newspaper
Why didnt Georgia get a MAP from NATO?
View Responses
US Dollar - 1.4550
Euro - 2.2737
Pound Sterling - 2.8850
Russian Ruble - 0.0616
Swiss Franc - 1.4355

The Messenger welcomes your comments, questions and letters to the editor. Please write to us at gtze@messenger.com.ge
The Messenger is looking for a new staff journalist