A Russian newspaper is reporting that Moscow will strengthen diplomatic ties with Georgias separatist regions, as their leaders opened the first embassy between the two self-declared republics. (more) 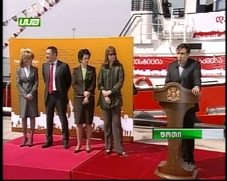 Pledging to turn Poti into a second Dubai, President Mikheil Saakashvili inaugurated the creation of a free economic zone and the reconstruction of Poti port yesterday. (more)

Sokhumi Airport is ready to receive any kind of plane from any country, announced Abkhaz TV on April 14. (more)

An informal telephone poll of 500 Tbilisi resident printed in the newspaper Sakartvelos Respublika suggests that the government and the opposition have roughly equal support in the city. (more)

Poll: What do businessmen in politics care most about?

Labor Party accuses the opposition coalition of agreeing with the government (more)
Coverage and analysis of the latest news from Georgia's most trusted newspaper
Should Georgian Orthodox Christianity become an official religion, a state religion or neither?
View Responses
US Dollar - 1.4505
Euro - 2.2903
Pound Sterling - 2.8608
Russian Ruble - 0.0617
Swiss Franc - 1.4521

The Messenger welcomes your comments, questions and letters to the editor. Please write to us at messenger@messenger.com.ge