GUAM summit wraps up in Batumi 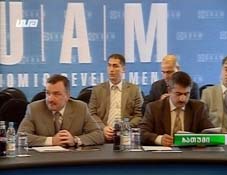 The GUAM summit at the Black Sea town of Batumi wrapped up on July 1 with Georgia assuming chairmanship of the organization. (more)

None injured in blast near Russian checkpoint

An explosion struck near a Russian checkpoint on the administrative border with Abkhazia yesterday. No one was injured in the blast, which Russian news agencies say happened on the Georgian side of the border. (more)

Georgias ethnic minorities left in the dark on NATO membership

Ethnic minorities in Georgia are less likely to know about and support the countrys NATO membership bid than other Georgian citizens, a local organization which works with minorities said yesterday. (more)

Georgias critical bid for membership in NATO has broad, if not unquestioning, support here. But ethnic minorities, particularly the sizable Armenian and Azeri communities, are in danger of being left on the wayside. (more)

The World Banks office in Tbilisi released a report on June 30 which urges post-Soviet countries to accelerate reforms that boost their economies productivity. (more)

Russian President Dmitry Medvedev is due to arrive in Turkmenistan today on his second trip to Central Asia since taking office this year, underlining the importance Russia attaches to the regions energy resources. (more)

United Opposition wont get finances from the budget

Yesterday, a healthcare ministry official was handcuffed and charged with taking bribes while news cameras looked on. (He suffered a heart attack afterwards.) Do televised arrests of corrupt officials send the right message?
View Responses
The Messenger welcomes your comments, questions and letters to the editor. Please write to us at messenger@messenger.com.ge
US Dollar - 1.4180
Euro - 2.2437
Pound Sterling - 2.8224
Russian Ruble - 0.0606
Swiss Franc - 1.3931