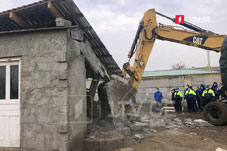 Tbilisi Municipal Inspection has started dismantling 12 illegally constructed residential buildings in the Africa settlement in Tbilisi, which has led to a confrontation between the local population and law enforcers. (more)

Grigol Vashadze, Chairman of the United National Movement, Georgias largest opposition party, announced on December 15 about leaving the party as well as stepping down from all held positions. (more)

The confrontation between the government and the opposition culminated before the opening of the new parliament. (more)