Pfizer to be first vaccine Georgia receives against Covid-19 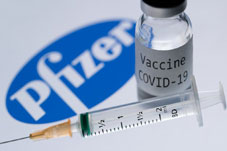 The Minister of Health Ekaretire Tikaradze, announced that in the near future it will be possible to vaccinate the population with the Pfizer vaccine, during a meeting with the US Ambassador to Georgia. (more)

The year started with the appearance of a new political party European Socialists in the Georgian Parliament. (more)

Georgia to receive 13,000 tonnes of the US wheat