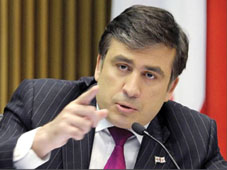 While tensions around its breakaway regions may have slackened since last week, Georgias president says the country is still facing down an international crisis. (more)

Moscow criticized a US diplomat for reportedly saying that Russian military forces in a Georgian breakaway region are excessive for peacekeeping activities. (more)

Last year Armenias GDP grew by 13.7 percent, mainly due to the construction and service sectors, according to the news agency Regnum. (more)

The newspaper Kviris Palitra asked 469 people whether they believe the promises made by politicians in the run-up to next weeks parliamentary elections. The newspaper did not specify its methods, or when the survey was carried out. (more)

Guguli Magradze: The National Movement is afraid it will not have a majority in the new parliament! (more)
Coverage and analysis of the latest news from Georgia's most trusted newspaper.
What would be the consequences of Russia opening military bases in Abkhazia?
View Responses
The Messenger welcomes your comments, questions and letters to the editor. Please write to us at messenger@messenger.com.ge
This newspaper is for you. What do you like? What do you want to change? Tell us! Click here to take our survey.
US Dollar - 1.4550
Euro - 2.2435
Pound Sterling - 2.8282
Russian Ruble - 0.0610
Swiss Franc - 1.3759