President Mikheil Saakashvilis first meeting with the new Russian president will cover some awkward ground, Saakashvili suggested this week as he outlined a possible agenda. (more) 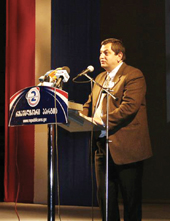 The Republicans released video footage yesterday which they say prove the May 21 parliamentary elections were rigged. (more)

Georgian Public Broadcaster board chairman Irakli Tripolski said yesterday he may not resign if his colleagues take his complaints into account. (more)

Earlier this week Poland and Sweden officially proposed an EU Eastern Partnership project aimed at bolstering ties between the EU and its eastern neighbors. (more)

Alternative parliament will be in New Rights office
Do you think the oppositions plans for an alternative government is a good idea?
View Responses
This newspaper is for you. What do you like? What do you want to change? Tell us! Click here to take our survey.
The Messenger welcomes your comments, questions and letters to the editor. Please write to us at messenger@messenger.com.ge
US Dollar - 1.4490
Euro - 2.2819
Pound Sterling - 2.8719
Russian Ruble - 0.0614
Swiss Franc - 1.4097