US Sens. Ted Cruz member of the Senate Foreign Relations Committee, John Cornyn, along with Reps. Jodey C. Arrington and Markwayne Mullin, sent a letter, dated May 15, to Secretary of State Mike Pompeo and Treasury Secretary Steve Mnuchin requesting a briefing in response to concerns about governance issues in Georgia, specifically Georgian illicit financial ties to America's rivals and enemies, including ties with Iran, that threaten US national security and business interests. (more)

4 years after the murder of Giga Otkhozoria 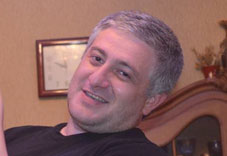 Citizen of Georgia, Giga Otkhozoria in exile from the region of Gali was killed in the neighboring municipality (Zugdidi) of occupied Abkhazia on May 19th 2016 by Rashid Kanji-Ogli, an Abkhaz border guard. (more)