The officers of the Ministry of Internal Affairs (MIA) detained 4 people on the facts of the violence that took place on September 27th in the village of Nakhiduri in Bolnisi Municipality and on September 29th in Marneuli. (more) 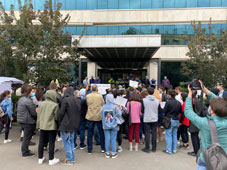 Opposition party Strategy Aghmashenebeli organised a protest on October 5th at Tbilisi city hall, demanding annulment of the fines that had been imposed on the party in August for putting up election posters on the locations where it is not permitted by law. (more)

In recent days, the coronavirus has continued to intensify and may collapse the health care system. (more)

Ministry of Economy of Georgia holds an online meeting with the U.S. Department of Commerce Deputy Under Secretary for International Trade