Following the former president Mikheil Saakashvili's request on January 1, 200 protestors seeking his release from prison called off a major hunger fast that began on December 21. (more) 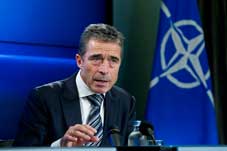 Former NATO secretary-general Anders Fogh Rasmussen has told a media outlet, Politico, that it is time that Georgia and Ukraine become NATO members as promised at the 2008 Bucharest Summit. (more)

Conversations About National Reconciliation Against the Backdrop of Political Polarization

The political polarization in Georgia and the need to reduce it have long been talked about both inside and outside the country. (more)