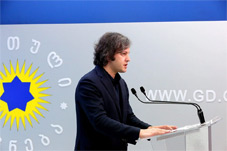 In an open letter to U.S. Ambassador Kelly Degnan, MP Mikheil Kavelashvili claimed that no Russian soft power could harm America's reputation in Georgia more than Degnan's words or silence, "which people may perceive as an attempt to restore the National Movement to power." (more)

Strategy Builder Responds to GDs Comments on US Ambassador Degnan

Today, the main topic of Georgian politics is discussing the fulfillment of the 12 demands presented by the European Union. (more)
The Messenger welcomes your comments, questions and letters to the editor. Please write to us at messenger@messenger.com.ge
US Dollar - 2.8896
Euro - 2.9327
Pound Sterling - 3.4649
100 Russian Ruble - 4.5856
Swiss Franc - 2.9594