Georgian officials downplay deal with US over hosting training base

John Hudson, who is a staff writer at Foreign Policy Magazine, said that he accepts responsibility for the accuracy of his article. (more) 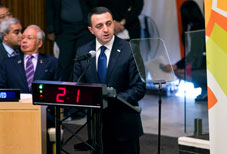 Climate change creates widespread and unpredictable change around the world and jeopardizes the lives of millions of people, Prime Minister of Georgia Irakli Garibashvili said in his speech at the UN Climate Summit. (more)

Georgias potential involvement in the developments in Syria and Iraq has become a topic of heated discussions in Georgia. (more)

Meeting with U.S. Secretary of Army