The meeting between the opposition and the government mediated by Christian Danielsson, the Personal Representative of the President of the Council of Europe, began at 5 pm yesterday and lasted for 7 hours. (more)

Georgia celebrates 30 anniversary of referendum day on the restoration of independence. 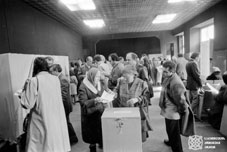 The referendum of March 31, 1991, is one of the most important events in Georgias history, based on which on April 9, 1991, the Supreme Council of Georgia declared the restoration of Georgia's state independence. (more)

Citizens over 55 to register for vaccination starting April 5

Political crisis in Georgia and Western vision of its overcoming

The political crisis continues in Georgia as the opposition parties and Georgian Dream are unable to reach an agreement. (more)