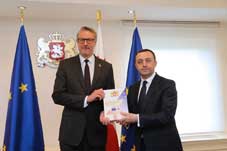 The Georgian Deputy Foreign Minister, Teimuraz Janjalia, has met with the Charge dAffaires of Ukraine, Andriy Kasyanov, who had been summoned to the Ministry over the information released by the Intelligence Service of the Ukrainian Defence Ministry. (more)